On October 26th, 2017, the Phillips Winning Icons Auction took place after months of anticipation. While the catalogue of timepieces up for auction contained over 50 incredible watches, the most anticipated piece up for auction was the original Rolex Daytona (reference 6239) that belonged to American actor, film director, producer, race car driver, entrepreneur, and philanthropist Paul Newman. 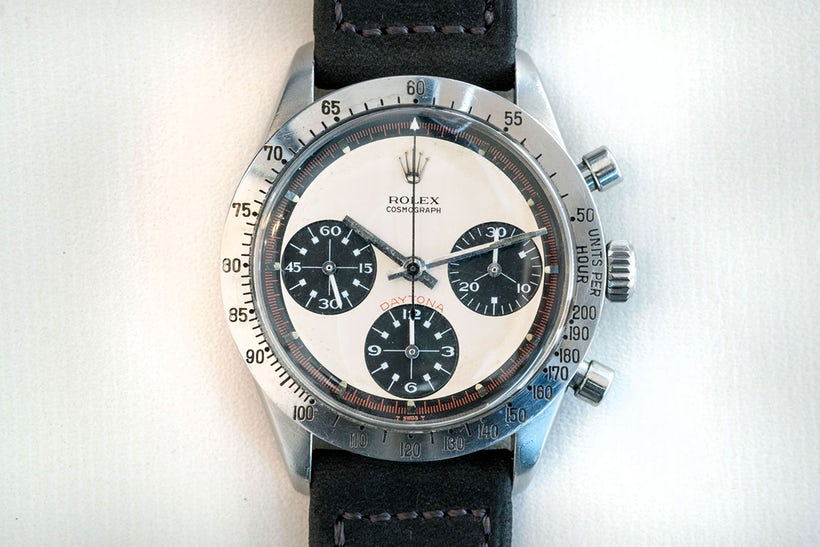 When the news was released back in June that the Paul Newman Daytona would be hitting the auction block, it quickly became the most-talked-about subject in watch circles across the world. The results of the auction emphasized just how special this timepiece is: Newman’s legendary Daytona sold for $17.75 million, making it the most expensive wristwatch ever sold at auction.

Daytona 6239 in excellent condition- Newman’s daughter said he wore it every day for over 15 years.

The watch dates to 1968 and the back case is engraved with the words “Drive Carefully Me.” This inscription is still fully visible on the case back today. In many ways, this watch was a catalyst to the vintage Rolex enthusiasm we’re seeing today that started about 3 decades ago. Watch collectors and dealers have known of this watch and have been chasing it ever since.

As the story goes, in 1984, Paul asked his daughter Nell’s boyfriend James Cox for the time while they were visiting the family home in Connecticut, and when James revealed that he actually didn’t wear a watch, Paul gave him his own right then and there. After wearing the treasured watch for several decades, Cox decided to put it up for auction. The proceeds from the sale of this timepiece will partially go to the the Nell Newman Foundation.

Paul Newman Daytona on the wrist

Shop all Rolex collections on AuthenticWatches.com at the following link:
https://www.authenticwatches.com/rolex.html

Some images courtesy of Hodinkee.com